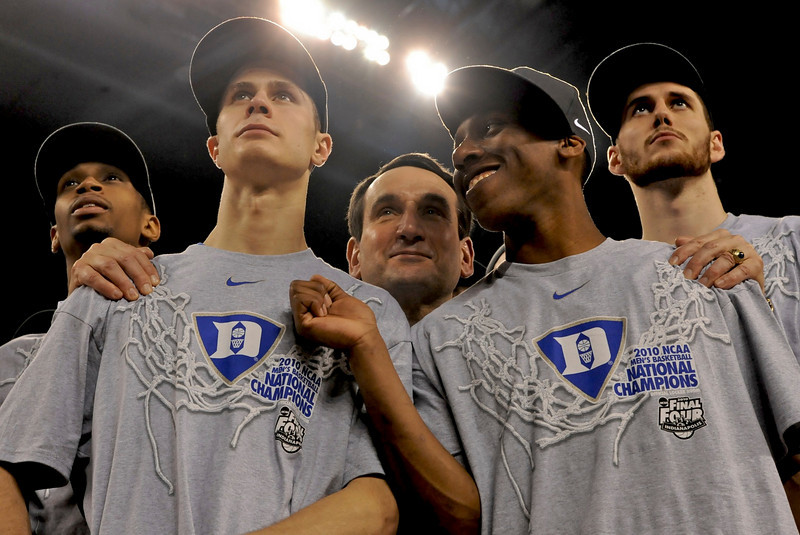 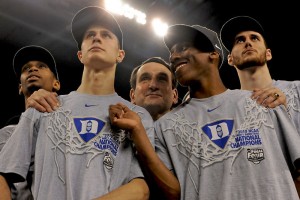 Coach K, the seniors and Nolan Smith look on as "One Shining Moment" plays on the big screens in Lucas Oil Stadium (courtesy DukeBluePlanet.com)

Before we discuss Duke’s incredible run to the National Championship this past weekend, let’s rewind a month to March 6th. Moments after defeating rival UNC 82-50, seniors Jon Scheyer, Lance Thomas, Brian Zoubek and fifth year player Jordan Davidson held court in front of a rabid audience of Cameron Crazies. Donning the fresh ’17-0′ t-shirts designed by Kyle Singler, our seniors recounted favorite memories from their illustrious Duke careers. Lance and Zoubek highlighted the ACC championship last season, and Davidson spoke of how fortunate he was to be on this team at all.

Jon Scheyer, however, took a different approach in his brief speech—he said his best moment was still to come. Would it be the 2010 ACC Tournament? Beating a fantastic Baylor team to reach the Final Four? Making it to the National Title game?

None of these. The Duke Blue Devils won the 2010 National Championship in a thrilling game over Butler—the best final game since Kansas-Memphis ’08 and perhaps one of the most exciting and nerve-wracking championship games of all time. Jon Scheyer’s best moment—and indeed, the best moment for each player on this special team—came on the latest possible date of his career: April 5th, 2010. Almost precisely a month after the victory over UNC.

It was indeed a banner year for Duke. Some of the statistics don’t appear on paper, but they are staggering: 31-0 in our home white jerseys, 35 victories overall and the trophy from every tournament we entered. We took home the Preseason NIT (UNC almost won the actual thing! Almost.), the ACC regular season and tournament crown, the South Regional championship, and the hardwood plank of the National Championship.

Here are some things to think about in remembering this tournament, this team and the young men who made it happen:

But lest we get too excited about next year…here’s Duke’s One Shining Moment. We will never forget this team, this season and the incredible run to a fourth National Title.

7 thoughts on “The Absolute Champions”