Two hard-fought conference victories later, Duke sits atop the ACC as the only undefeated team. Despite trailing throughout the first half against both Virginia and Clemson, the Blue Devils were able to rally and overcome the adversity they faced. As Duke continues to grind out close victories and its top non-conference foes continue to win and rise in the rankings, the Blue Devils’ strength of schedule this year continues to look even more remarkable. Let’s take a look back at Duke’s past two victories using our motion chart and advanced metrics and see what the box scores from these games did not tell you: 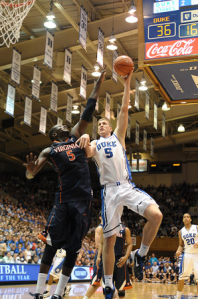 Virginia:
Duke was able to eek out a close win against Virginia, but its safe to say that they were letting the Cavaliers play their game. Virginia slowed down the tempo of the game and kept the pace steady in half-court sets, and it showed for Duke statistically. The Blue Devils’ 61 points accounted for Duke’s lowest scoring output of the year, and it was just the first time all year they had won a game when scoring fewer than 68 points. The highest GameScore for Duke against Virginia was a mere 8.6 for Mason Plumlee, who shot an efficient 5-of-6 from the field but left quite a few points at the foul line, shooting just 2-for-10 on the game. With 12 points, Plumlee was Duke’s leading scorer, accounting for the lowest point total for Duke’s leading scorer since Tom Emma and Vince Taylor led the way with 12 apiece in a Duke loss to Maryland on January 9, 1982 in Mike Krzyzewski’s second year as the Blue Devils’ head coach. The final score of the game was 40-36. Duke scored 10 points in the second half. However, Duke’s consistency showed through against Virginia, with four players scoring in double figures the GameScores were reasonably consistent. Six of the eight Duke players that saw the floor against Virginia had GameScores between 5.1 and 8.6. It wasn’t pretty, but it was definitely a team effort out there. 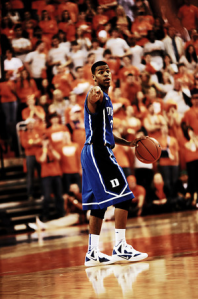 You'd probably find this picture in the dictionary under "swag". (photo courtesy of DukeBluePlanet)

Clemson:
Although it took a little time to get started up, Duke returned to its usual form in a 73-66 win over Clemson. Andre Dawkins led the way for the Blue Devils with 24 points on 7-of-12 shooting, including 5-for-9 from behind the arc. With a tremendous GameScore of 20.0, this was the first time Dawkins had scored above 6.9 in a game in nearly a full month. The last time he accomplished that was in Duke’s win over UNC-Greensboro on December 19. But while Dawkins success was quite visible through his scoring output, some might argue that he was nearly overshadowed by the play of Miles Plumlee. Miles scored just six points, but pulled down 14 rebounds, six of them on the offensive end, in just 23 minutes. This accounted for an Oreb% of 29.81%, which statistically speaking is practically off the charts. As he continues to come on strong in the midst of his senior year, Miles can’t help but remind us of another Duke player from not too long ago. And in case you don’t remember, things turned out quite wellfor that team. Meanwhile, against Clemson Mason Plumlee played his usual Mason Plumlee game, scoring 12 points and adding seven rebounds on just an 18.55% Usage%. Mason’s performance was good for a GameScore of 9.8 as he continues to show consistency on the offensive end.

Can you say "dunk face"? (photo courtesy of DukeBluePlanet)

What We Learned:
Andre Dawkins is back in an upswing-After struggling for most of December and the beginning of January to the point where he often looked invisible on the floor, Dawkins is beginning to find his form again. After playing what Coach K called “his best defensive performance of the season” against Virginia, Dre exploded against Clemson in one of those classic “Andre Dawkins can’t miss a shot” games. Dawkins is playing some of the quality basketball we saw from him in the early part of the season, and at this point we just hope he can keep it up. He has the potential to be one of the greatest weapons in the ACC off the bench.

This team continues to fade in and out, but at some point it just has to click- It seems as though every player on this team has gone through its fair share of ups and downs this season with the exception of Mason Plumlee and Ryan Kelly. Though that is not ideal, it is good to see who is stepping up at this point in the season. The beginning of the season was all about Seth Curry and Ryan Kelly and then Austin Rivers began to take over in December, but now with Seth and Austin struggling Miles Plumlee, Quinn Cook, and Andre Dawkins are picking up their slack. You have to think that sometime soon Rivers and Curry will get back on top of their games, and if everyone else can continue to produce this team has the potential to be very scary down the stretch.