Welcome to the Madness, folks. To follow up on our preview of the South Region (Duke’s region) from yesterday, I’m here with a few thoughts on the West Region, which stars Michigan State as the #1 seed and a host of interesting players. Read on…

The West Region. (via ESPN.com's Bracket)

Obviously, the 8/9 game is intended to be between teams with parity; due to the closeness in seeding, victory in this game is less impressive than the potential of knocking off the #1 seed in the next round. I’m particularly intrigued  by this game, though, because of the coaching matchup. Memphis is led by Josh Pastner, a young ingenue/madman who succeeded John Calipari when he left for Kentucky. Saint Louis, on the other hand, is led by Rick Majerus, an old hand who has won 70% of his games, whose sweaters are the stuff of legend and whose Utah Utes took down UNC in the 1998 Final Four. It’s crazed fervor versus vintage stoicism, and the teams seem to be evenly matched. On paper, Memphis looks loads better: several 5 star recruits, including local legend Joe Jackson and star swing guard Will Barton. But the Tigers have struggled against big competition all year, losing early season matchups against Georgetown, Louisville and Murray State and dropping 3 games in the generally atrocious Conference USA. Saint Louis, though lacking the supposed star power of the Tigers, has balance and consistency–three players averaging in double figures–as well as defense, with the seventh best defensive rating in the NCAA allowing just 57.5 points per game. Ken Pomeroy has the Billikens at 15th in the country in his mathematically generated rankings (Memphis is 9th, though). Saint Louis finished second in the Atlantic 10, a vastly superior conference than the C-USA. It’s a clash of generations and a battle for Interstate 55 supremacy. Something tells me the youth and athleticism of Memphis will seize the day, but expect an exciting contest for the right to play (presumably) Michigan State.

If I were Murray State, I’d be pissed with my seed. The Racers, one of four Kentucky universities to make the Dance (along with UK, Louisville and Western Kentucky), are 30-1 and beat tournament teams Memphis, St. Mary’s and the aforementioned WKU Hilltoppers during the season. Don’t fault their iffy strength of schedule, which is 239th out of 344 teams. Murray State’s top 5 scorers are upperclassmen with tournament experience, and they will come to the tourney with something to prove. We think they’re Sweet 16 bound and could present a problem for Missouri if they get there.

Gordon is a former big name recruit, somewhat pursued by Duke, who has had a strange journey to stardom for the Lobos and Coach Steve Alford. He transferred from UCLA after two seasons, apparently due to discipline problems and disagreements with Coach Ben Howland (who apparently has had many personnel problems in the past few years). Gordon has thrived at New Mexico, averaging a double-double for his final two seasons. He averaged 15.3 points and 10.6 rebounds in the Mountain West tournament and led the Lobos to the title with big victories over UNLV and San Diego State, both of whom are dancing. Gordon–mature, poised and 6’9” 245 lbs.–could provide a spark for the Lobos. If they get past Long Beach State, the potential matchup with big, physical Louisville is tantalizing.

Our Picks: Mizzou to the Final Four

I don’t foresee too many upsets in this region–in the first round, anyway. Some surprises might include Murray State to the Sweet 16 with a victory over Marquette and, if all goes well for Billy Donovan, Florida could ostensibly beat Mizzou. But it’s not likely–Missouri is primed to go to the Final Four. Having been snubbed by the selection committee after winning the Big XII title over Baylor, the Tigers got a favorable draw with this bracket. Michigan State is the weakest of the #1 seeds to me, although they are much better coached by Tom Izzo than Mizzou, who hired former Miami coach Frank Haith (how did he get that job?). The Tigers are loaded with seniors and physical guards. Ricardo Ratliffe matches up well with Spartan star forward Draymond Green. Kim English, a 6’6” guard who shoots nearly 50% from 3, is a matchup nightmare for anyone. The Tigers went 30-4; expect them to be 34-4 when the Final Four rolls around.

Below are our complete picks. Let us know what you think in the comment box! 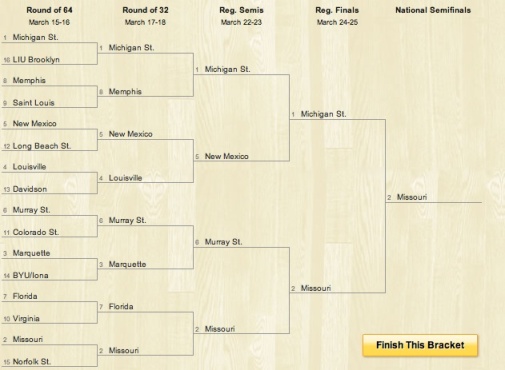 Crazie-Talk's picks for the West Region. Don't hold us to 'em.

Also, if you’re interesting in competing in our version of the Bracket Challenge, Gothic Madness, and competing against the fans of three other Duke sites, join Team Crazie Talk (#TeamCT). E-mail us at crazietalk@gmail.com or tweet at us @crazietalker to join. More details here. Thanks!