Rasheed Sulaimon, Scout.com’s 4th-ranked shooting guard in the Class of 2012, has committed to Duke just a day after witnessing one of the greatest comebacks in the storied Battle of Tobacco Road.  Sulaimon represents the 2nd 5-star recruit Duke has nabbed this week, joining other 2012 phenom Alex Murphy.  There were some rumors last weekend that Sulaimon was going to commit soon, and all of us at C-T were hoping they were true.  We are more than excited to have him join the crew in 2012.

Here’s what he says he has to offer, taken from an interview with Adam Zagoria just prior to his visit:

“I’ll just bring a guy who’s hardworking, who can play pressure defense and is willing to do whatever coach asks me,” he said. “Be a great teammate and a great leader.”

Just like Murphy, Sulaimon is drawing comparisons to two players who have donned Pantone 287: Daniel Ewing and a certain @NdotSmitty.  He is a 6’4’’ smooth-shooting combo guard who possesses both great range and the ability to finish at the hoop.  He brings a ton of energy to the floor and utilizes his quickness and athleticism when getting to the rim.  As ESPN.com describes, he “has all the tools to be a special college player.”  We certainly think so, too.

Sulaimon, who hails from Houston, TX, had also been considering UNC, Texas, and Baylor, among other schools.  Check out some of his highlights below, courtesy of Hardwood Elite.

Once again, another top recruit has committed to play for Coach K and his staff.  As we mentioned in the Murphy article, high school players all over the nation think Duke is hot right now, and rightfully so.  Let’s only hope our success continues into the future.

Duke fans woke up to some terrific and unexpected news on Monday morning, just two days before the Tar Heels visit Cameron for the first Battle of Tobacco Road of 2011. 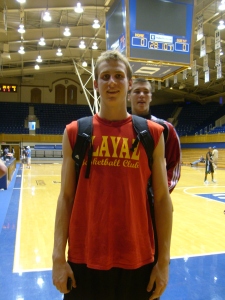 2012 Alex Murphy got comfortable in Cameron Indoor over the summer. (Photo property of Crazie-Talk

Conveniently for Blue Devil fans who don’t pay much attention to the rest of college basketball, Murphy’s most appropriate basketball comparisons come from inside the family. Two of his favorite players are Kyle Singler and Mike Dunleavy, Jr.—lanky small forwards with shooting range, high basketball IQ, and deceptive athleticism—and Murphy emulates them on the court.

Recruiting guru Bob Gibbons even gave Murphy a slight nod over Singler in terms of rate of development:

“[Murphy’s] not as physically strong and advanced right now,” Gibbons said, “but compare them at the same level as juniors in high school, I think Alex might get a little higher mark than Kyle.”

When C-T saw him play last summer in the Bob Gibbons Tournament of Champions, we noted Murphy’s fearlessness in going to the hoop with either hand, activeness on defense, and ballhandling abilities. Add to that list the ability to dunk over seven footers and posterize Indiana commitments and you have an inkling of what Murphy will bring to Duke. While it’s clear that he needs to improve his strength (which he admits himself), Alex has all the natural talent required for big time college basketball. He’s ranked in the top 20 by most recruiting services, and it’s likely he’ll continue to improve in the next year.

That Murphy chose the Blue Devils over several other big name programs is also heartening. His brother Erik, once a Duke target himself, is now a forward at Florida. The Gators went after little brother hard, but after visiting Duke for the home game against Maryland, Murphy knew where he wanted to play:

If there’s any lingering feeling that Coach K is slipping on the recruiting trail, Murphy’s choice—which came pretty early in the game—should put those fears to rest. After picking up blue chippers Austin Rivers, Quinn Cook and Marshall Plumlee since the 2010 National Championship, it is clear that high school players—ever trend followers—think Duke is hot right now. Our continued dominance of the ACC and another big run in March will help solidify our rep. The 5-stars will come running.

Enjoy the filthy highlights of Alex Murphy from One Entertainment below. Welcome to Duke, Alex.

It’s Heel Week, everybody. Check back tomorrow for the sequel to the legendary “10 Questions for Ed Davis and Co.” YEEHAW!