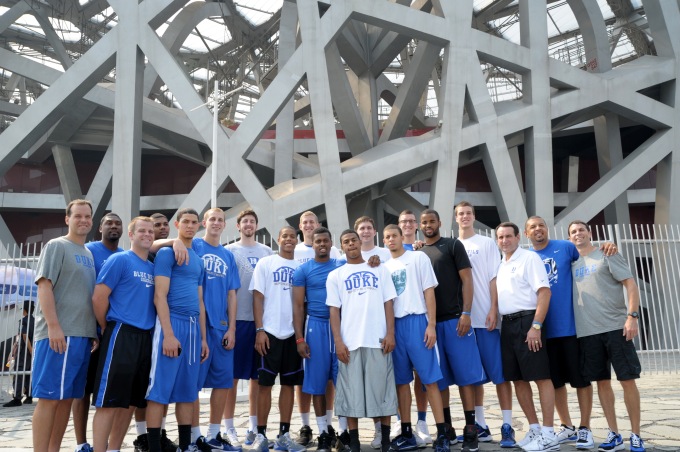 The team got the opportunity to check out the Bird's Nest, where much of the 2008 Beijing Olympics took place. (Photo: DukeBluePlanet.com)

You all probably know by now about Duke’s summer excursion.  The Blue Devils defeated the Chinese Junior National Team 93-78 yesterday, sweeping the 3-game series.  Ryan Kelly led the way with 20 points, and Miles Plumlee had a nice double-double with 14 points and 13 rebounds.  All in all, the team had 6 players in double-digit scoring.  Be sure to take a look at some of the postgame interviews on GoDuke.com.  Now, Duke is off to Dubai and will face the UAE National Team this Thursday, August 25th.

2.  Follow the remainder of the team’s journey with DukeBluePlanet

Outside of the games themselves, the team has been quite busy, from visiting the Forbidden City to climbing the Great Wall of China.  Catch up on all their experiences by checking out our good friend Dave Bradley’s blog of their time there.

Two Duke faculty members explain what makes Coach K such an effective coach and leader.  They discuss how he creates a strong sense of community and spirit and suggest a few of his strategies for business leaders to follow.  Definitely check out this excellent article.

As alluded to earlier, RKelly has been on an absolute tear in China.  Even the Twitterverse is taking notice.  Could this be his break out year?  Only time will tell, but we certainly hope so!

Three of Duke’s top 2013 targets are Jabari Parker, Julius Randle, and Nerlens Noel.  All three are right at the top of the Class of 2013 rankings.  Read a little about each of them and find out why many think this class has a chance to be one of the best in recent memory.  Afterwards, take a look at who else Duke is targeting in the Classes of 2012 and 2013.

6.  Elton Brand Gives His Thoughts on the Lockout’s Progress

And finally, some news from the NBA.  Elton Brand, former Blue Devil, is itching to play basketball again with his team, the Philadelphia 76ers.  So much that he helped set up a team workout for the coming week.  He’s been following the lockout’s progress closely for his teammates and hopes a resolution will come soon, though he admits that might be a bit of wishful thinking.  See what Brand has to say about what he’s been up to and what his near future looks like.

That’s all for this week’s Deviled Eggs.  Hope you enjoyed them!  Best of luck to the team on Thursday, and be on the lookout for more from us at Crazie-Talk as the team finishes up its worldwide tour!

Every Monday morning, Crazie-Talk culls Duke basketball news, articles, and videos into a half dozen of the best “Deviled Eggs” on the interwebs.

Here are this week’s best. 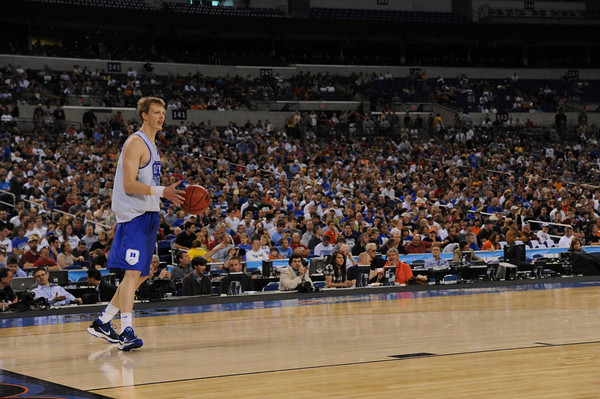 Kyle Singler should be back in full form before Countdown to Craziness. Will he earn his place in the rafters this year? (Photo courtesy of DukeBluePlanet.com)

The reigning Final Four Most Outstanding Player had an extremely busy summer. Among his many activities, #12 played for the U.S. Select Team in Vegas and New York, hosted a basketball camp for kids in his native Oregon, and competed against much shorter dudes—and future UNC opponents—at Chris Paul’s guards camp. Thus, it’s no wonder that he wasn’t 100% after working hard through the season that saw many hoopsters chilling at home. Wojo had this to say, quoted from the GoDuke.com article:

“Kyle had some discomfort in his knee following a very busy summer so we elected to go in and clean it up prior to the start of the season…By all accounts, today’s surgery was a success and Kyle will be back at full strength before the start of practice.”

Singler is the noted Iron Man of our team—how many bruises and black eyes has he been dealt in his career? A little knee surgery most likely won’t slow his roll too much, and I’m pleased that Kyle, the staff and the medical team decided to “clean it up” sooner rather than later. I don’t want anything derailing his campaign for National Player of the Year.

One of the best games in the ACC last year was Duke-Maryland in College Park (ESPN’s Steve Levy’s hilariously unsubtle remark in that highlight: “Me? I’m like everybody else. I’m going to find [UMd. alumnus Scott] van Pelt at Bentley’s or something like that…”) Greivis Vasquez went crazy on his senior night, and I grudgingly gave him respect. Maryland forced Duke’s hand to tie them at the top of the conference standings against UNC, which happily resulted in 82-50. And we didn’t lose again. Maryland got their national championship, we got ours. Fun for all, right?

Well, Maryland students celebrated by taking it to their own town and pissing off some power-tripping crazy policemen. In response to this perennial mess, this coming year the authorities are trying to tame the celebration after a potential victory over Duke. That amounts to two new protocol: hosing down dumpsters to prevent fires and trying to keep glass bottles of the streets. I guess it’s a start. Something tells me that after years of acting the fool, Maryland students will try their damndest to destroy and burn things after Duke games, win or lose. And considering Vasquez is finally gone and Duke’s bench is better than the remnants in College Park, expect the latter this year. Hopefully the cops will avoid beating another happy-go-lucky student so I can go back to being absolutely pitiless for the pitiful Terps.

Anyway, kudos to the Maryland police for trying to control the bunch of wackos who go to school there. Nothing this recession-riddled economy needs more than its state-funded students destroying their own state-funded institution, right?

(Bonus: In Googling around about Maryland fans, I found a hilarious post celebrating Duke’s ’08 win in College Park. Enjoy.)

There seems to be an abundance of amazing high school hoops mixtape artists these days. Thank jeebus for those YouTubes, right?

One of our favorites, BallisLife.com, recently compiled highlights of two of Duke’s 2011 guard prospects: Crazie-Talk’s most wanted, Austin Rivers, and the next great Oak Hill Academy (and Blue Devil?) point guard, Quinn Cook. Both had dynamite summers and are surefire five star recruits. Enjoy the highlights.

Sidenote: Cook injured his knee in the recent Elite 24 event, and we’re happy to hear that his recovery—which was previously estimated to knock him out for the entire high school season—should only take 4-5 weeks. We wish him luck and hope to see him lead Oak Hill back to the promised land. That’d sure make his godbrother Nolan Smith happy.

5. Duke football starts off on a good note

Before I leave the U.S. for a semester in rainy Dublin, I wanted to check out Duke’s opening football game against the not-awful Elon Phoenix this weekend. And I wasn’t disappointed with our 41-27 victory in packed-to-the-brim Wallace Wade Stadium. What used to be a groan-inducing program is firmly on the upswing, and I can’t wait to see what the messianic Cutcliffe builds in coming seasons. Especially if our quarterback Sean Renfree keeps on putting up these ridiculous numbers.

However, it might be good to be out of the country so I don’t have to witness what Alabama will do to us in a few weeks. As an unnamed friend who works for the football team told me, “they could score on every play if they wanted to.” Yikes. Go Duke!

Dave Bradley, the genius behind DukeBluePlanet.com (which, you may have noticed, kindly allows us to use his stellar photos), has written Worthy Champions, a book celebrating last year’s run to the title. In addition to being a great guy, Dave has unprecedented access to the team. If you already follow DBP, you know this from his fantastic interviews, videos, blog posts, etc. It’s truly in a class of its own in terms of the websites of college basketball programs.

The book will be out later this week, so be sure to follow Dave on Twitter for all the details. It will likely be available at the physical Duke store and on their website. If you spring for one more piece of championship memorabilia, this should be it.

UPDATE: The book is now available at the physical Duke bookstore and through their website. Enjoy!

From Dime Magazine, a video of 50 ridiculous college hoops dunks. Grant Hill checks in at #42, and Dahntay Jones’ pushup dunk at Virginia at #7. ACC love abounds; among others, Vince Carter, Stackhouse, Georgia Tech’s Isma’il Muhammad and Miami’s DeQuan Jones all make the cut. Check the whole video out below:

If it had been a top 100, I bet this poster by Gerald Henderson would have qualified.

Thanks for your continued support of Crazie-Talk. If you want to give us a shout-out or a shout-down, feel free to do it on Twitter, Facebook, or by e-mailing us (email@crazie-talk.com). Tally-ho!

Every Monday morning, Crazie Talk culls Duke basketball news, articles, and videos into a half dozen of the best “Deviled Eggs” on the interwebs.

Here are this week’s best: 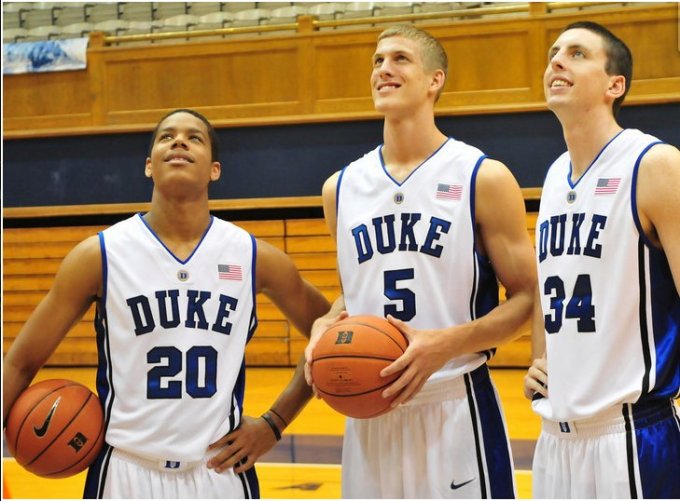 A Few Good Men: the Freshmen Trio. (courtesy of DukeBluePlanet.com)

GP2 displayed the qualities that endeared him to Duke fans for four years as GP3 – leadership, toughness and poise. But he left some fodder for the haters as well with that game-sealing interception.

Duke at 14? Time will tell if that ranking is too low. We here at CT like Andy Katz over at ESPN better.

SLAM catches up with our starting point guard, as Nolan will be running the show this year without having to look over his shoulder. In Nolan we trust.

DukeBluePlanet with a photo gallery for the jerseys that will be worn by the Blue Devils this season.

Howard Hurt, captain of the 1961 Blue Devil squad, remains an athlete, at 70 years of age.

6. Keeping Up with Harrison Barnes

Though Duke was in the mix, UNC seemed to be the frontrunner all along.