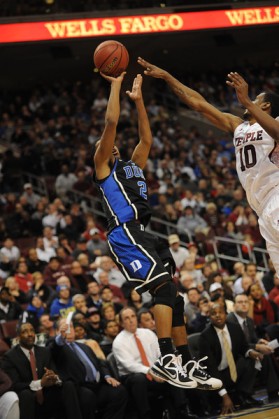 So, the title of this article, I believe, is commensurate with what Coach K must have told this team as they evaporated, like so many pitiful ghosts, into the recesses of the Wells Fargo Center as Temple fans (and this idiot) rushed the court. Temple earned this victory with some incredible playmaking. They managed to outrebound a much bigger team, overcome a number of valiant comeback attempts, and make enough free throws to seal the victory.

Here are my thoughts, broken down into positives and negatives. Let’s do those negatives first, since most of them are still burned onto my retinas.

Amber Alert for our veteran guards. Especially Mr. Andre Dawkins. We all love the kid, but he’s off in another world right now, and hasn’t found his place on this team. In 19 minutes, he scored no points, took three shots and got a single rebound. He fouled once. Where’s his head? Where’s the passion for the game he showed as a freshman, when he demanded the ball against Baylor and hit two huge threes? Right now, he’s as useful as four Wear twins on the court.

Seth Curry was similarly disappointing, particularly considering he’s supposed to be the leader of this team. Sure, he had four steals, but he also committed five turnovers, usually while trying to do something he’s just not capable of: being a big game point guard. He’s just not. He was never meant to be a point guard. Since Thornton has proved incapable of replacing Irving and Smith and Quinn Cook is–what, too young?–Curry has been thrust into a role with which he’s struggling mightily. If Duke wants to make a stink beyond February, we need a real point guard. By any means necessary. Just figure it out. Cook might be the best option if he can play enough to get comfortable leading the team.

So. Direct message to Quinn Cook. You have proved to be the most canny and competent point guard on the team. But, dude, stop shooting threes. Especially contested threes, or threes shot after two seconds of hesitation, or 25-foot threes. Because that’s your m.o. right now, and it’s not ideal. Be a distributor, get in the lane and find slashers. That’s what you’re good at! That’s what you were taught at Oak Hill and Dematha and that’s what you’re learning here, I hope, from all those former Duke PG assistant coaches over on the bench. Because Kyrie Irving may be the hero Duke deserves, but it’s not the one it needs right now. We need someone more in the mold of John Stockton.

If we are comparing defenses to wines, Duke’s was two buck Chuck against Temple. A sloshy combination of nonsensical on-ball defending and terrible helpside defense, a conflagration of elements that leave a horrible taste in your mouth. Pure laziness, like how Two Buck Chuck is what you drink if you’re tired, lazy and broke. You’d think that we would try to defend against Juan Fernandez’s behind the back pass after he did it once, right? Wrong.

I don’t know how many times we needed to hear Jimmy Dykes talk about it*, but we’re not going anywhere if we have more turnovers than assists. Team assist to turnover ratio, I guess? Against Temple it was 13 assists to 16 turnovers. Many of those TO’s were the result of ill-advised drives by Curry and Austin Rivers. (Rivers, by the way, reverted back to his November self, shooting 3-11 and telegraphing all of his drives like Samuel Morse). This goes back to the yawning chasm of a point guard situation, but Duke players are supposed to be smarter than that.

Also, screw the black jerseys, a topic which bring us to the tweet of the night from ESPN announcer and Boston College alumnus  John “Boog” Sciambi.

I’m going to keep this brief. Thanks, Plumlees, for making this game at least somewhat competitive. You combined for 33 points and 16 rebounds (basically equalling the performance of one Kevin Love on an average night). Sure, Mason and Miles missed some layups in the final five minutes that would have cut the Owl lead further, but hey, they’re not supposed to be the best finishers. Wait, yes they are. Forget it, I’m not going down that road, it might lead me to talk about Ryan Kelly’s godawful performance, and I just can’t do it right now.

Thanks, Josh Hairston, for knowing your role and only shooting once in the game. Let’s keep it that way, yes?

Thanks, Michael Gbinije, for making both of your shots and not turning the ball over. Gold star. You should get more playing time because you clearly have a firm sense of what you can do on the court. Can you teach the rest of the team?

So I have a simple solution that might help us going forward into ACC play, starting Saturday at Georgia Tech.

This team needs to get mad. I mean fiery mad, Kim Jong-Il at the rest of the world mad, Michelle Bachmann at Newt Gingrich mad, Colin Cowherd at Virginia football mad, Jim Everett at Jim Rome mad. No more demure, “why me?” gazes from Curry and Dawkins when something goes wrong. No more Plumlee nice guys. I want Marshall on the bench in war paint, even if he might be redshirted for the next three years. I want Quinn Cook ripping off his jersey to reveal “COME AT ME BRO” scrawled in Sharpie on his chest. I want this team to play bloodsport. With pride. Like they have nothing to lose.

In the locker room, maybe Coach K will play the Howard Beale video (below) before every practice. When Mason misses a rotation, Miles should be in his face, screaming “I’M MAD AS HELL, AND I’M NOT GONNA TAKE IT ANYMORE!” Likewise when Rivers forces an impossible drive, when Seth Curry drops his head after getting the ball stripped, and when Andre Dawkins looks like he wants to quit basketball forever.

We need to get mad. Otherwise, UNC might coast to the ACC title and the world will end in December.**

*Answer: None. None times. I never want to hear Jimmy Dykes speak again in my life.

**Basically, those two scenarios are the same.